The Oblates of Mount Saviour Monastery

​”It is the silence of eternity that unites the soul with God.”
​Sister Marie Aimee de Jesus

The air was chilled; winds bent the branches of the trees carrying the low hanging clouds across a grey sky as his Brother Monks bore Brother Justin along the pathway, to the repeated single toll of the tower bell and into the Chapel where, seven times daily they had gathered together in prayer and psalm. There they were met by Father Michael Perry. After he had finished the prayers and sprinkled Holy Water, he paused into the silence of the Chapel for a brief moment and then said in a clear voice: “Welcome home.” Welcome home. Two words that felt to wash the sting of death away. Our pilgrimage of farewell had begun. We then gathered for the Divine Office of None.

Over the next hours family and friends came to the Chapel to bid their farewells. Vespers, Compline, the early next morning’s Vigil and Lauds – the unbroken rhythm of monastic life slowly led to Brother Justin’s funeral Mass, officiated by Father Donald Curtiss. So much was the same: nature in rebirth, bird song sung so clear as it always seems to be in spring, sheep grazing in the fields around the monastery; life in continuance, the unbroken rhythm of God’s creation. Though for us there was the difference; an absence, a separation that can only be bridged by acknowledging that it is not our will but God’s will that is done. True it was a time of great sadness but there was also a joy in the awareness of the life that Brother Justin lived and the gifts he freely gave us. He has left us with a light that will not grow dim and in this manner his spirit will always be present in our eyes, hearts and spirits.

“Grant Him, Eternal Rest” began the service, followed by Scripture readings: Wisdom 3: 1-9 (the souls of the righteous are in the hands of God), Psalm 42 sung: “As a Deer yearns for Living Water”, Romans 5: 5-11 (God’s love has been poured into our hearts through the Holy Spirit) and the “Beatitudes”: Matthew 5: 1 – 12a (Blessed are the pure in heart, for they will see God). Members of Brother Justin’s family spoke of the depth of his love and how happy they knew he was in his life at Mount Saviour. This sentiment was so often repeated. Brother Justin was full of joy which we all saw radiating from him into our lives whenever he greeted us. This sentiment was reiterated by Brother John in reflections that were received from those who could not be present. Brother Pierre sang the beautiful hymn: “Going Home”, which brought
to mind the thought that we were participating in Brother Justin’s “Welcome to his eternal home”. After the closing and incensing of Brother Justin, we sang “Amazing Grace” as he left the Chapel, carried by members of his family and his brother monks.
He will return to the Chapel one last time on May 12th with Brother Stephen on the day of their burial. 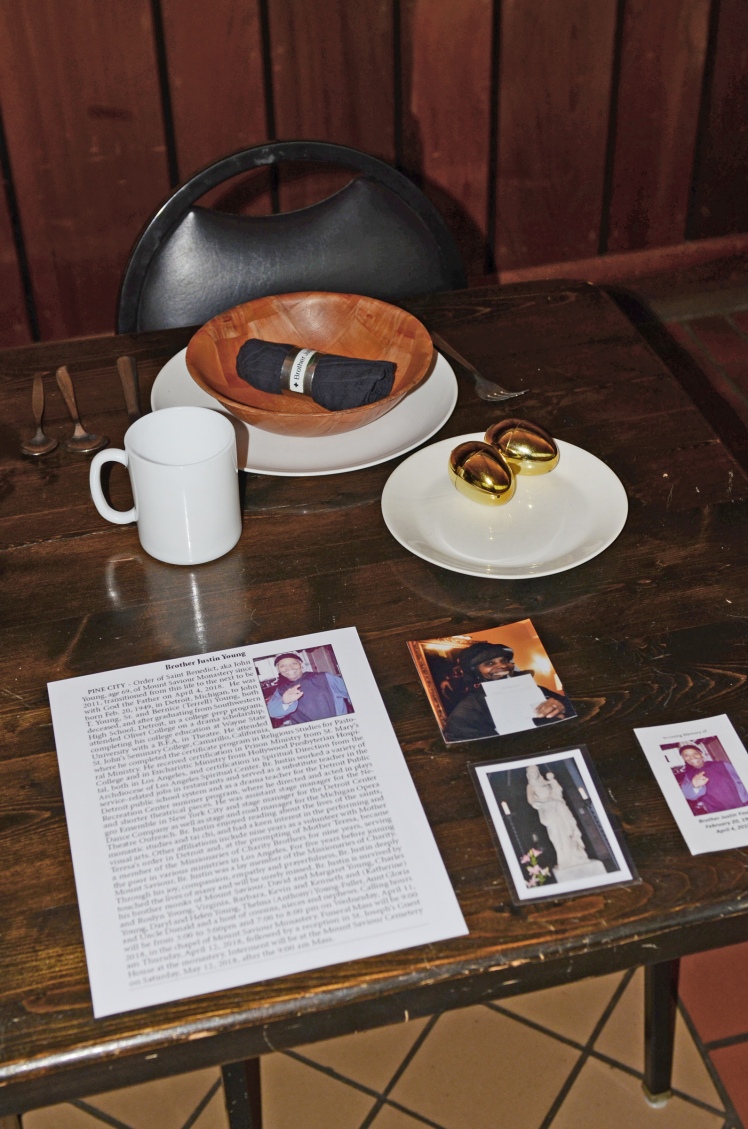 And life is eternal and love is immortal,
and death is only a horizon,
and a horizon is nothing, save the limit of our sight.
​ Fr. Bede Jarrett, OP